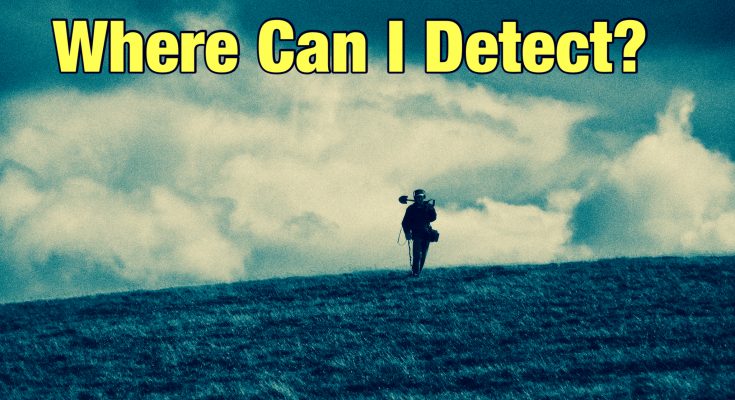 However, do not despair. If you read on, this article will guide you through the legal aspects of metal detecting in the UK, and provide you with solutions to a dilemma that faces every new metal detectorist keen to experience their first day of metal detecting.

The Law and Metal Detecting in the UK

Basically metal detectorists in the UK do not have the legal right to metal detect on private/public land, on which they do not have permission from the owner to do so. All land in the UK, is owned by someone. This includes but is not exclusive to fields, woods, public parks, ‘common land,’ and even ‘unregistered/no man’s land.’ According to the government, in England and Wales, all land is owned by somebody, even if the owner cannot be identified. Some detectorists may believe that they have found a loophole in the law, e.g. being allowed to detect on ‘rights of way’ without seeking permission. However, this is a false belief. At the end of the day ‘rights of way’ pass over privately owned land, therefore you are obliged to seek permission, or could probably end up getting into bother with the law if you fail to do so.

I Don’t Have any Metal Detecting Permissions, So Where Can I Detect?

Everyone has to start somewhere, and if you have a garden, there is no better place to start your metal detecting career. You can get used to how your new metal detector works, and quite possibly dig up some old coins or even jewellery while you are at it. Once you have fully detected your own garden, then maybe friends and family could give you access to their gardens, while you further ‘learn the ropes’ of your new hobby.

This option is ideal for beginner detectorists. Throughout the UK, metal detectingclubs hold regular events (often at the weekends,) that offer the perfect solutionto those who do not have any land permissions of their own to dig on.

For a small fee e.g. £10-20 per day, metal detecting clubs will allow you to dig on land where permission has already been obtained from the land owner. Not only will the hard work of obtaining permission already be done for you, clubs offer the opportunity to meet up with more experienced detectorists, and learn from them.

Rallies tend to be larger scale events, with one of the better known ones being Detectival (https://www.detectival.com.) These events often go on for a whole weekend, attracting detectorists and detector manufacturers from all over the UK and beyond. Rallies often provide attendees with large areas of land to detect on. For example Detectival obtained over 1000 acres of ‘detecting land’ in an area with real history behind it. What’s more live music, beer tents, food stalls, and even new product launches are often part of the package, making metal detecting rallies genuinely memorable events to attend.

Beaches are another good option for the detectorist who does not have permission to metal detect on land. However, there are a few issues to keep in mind. In England, and Wales beach detecting is allowed on beaches owned by what is known as the ‘Crown Estate.’ In Scotland likewise, beach detecting is allowed on beaches owned by ‘Crown Estate Scotland.’ However, not all beaches are owned by the ‘Crown Estate.’  No permit is necessary to metal detect on Crown Estate beaches between the mean low and high tide marks.

Crown Estate England/Wales beaches are marked on the following map in purple (zoom in for detail.)

Some beaches however are owned by private organisations/individuals and permission must be sought before detecting on them. In some cases such as beaches owned by the National Trust, there is a blanket ban on metal detecting and trying to seek permission will result in a guaranteed refusal.

Another issue that may be encountered when beach detecting, is that some beaches are designated as SSSI’s i.e. that is ‘Sites of Special Scientific Interest.’

It is strongly advised that since these are ‘protected areas,’ to contact either Natural England or NatureScot before metal detecting on an SSSI beach, and clarify whether detecting is permitted or not.

I Don’t Have a Garden, and Live Nowhere Near a Beach. What Next?

If the above applies to you, then apart from joining a club, the only other realistic option is to legally seek permission from a landowner such as a farmer. However, the topic of seeking permission from landowners is a lengthy one, and cannot be covered in this article. The skill of permission seeking will be addressed in a separate article.

Do I Need Permission to Metal Detect in the UK?

Yes, with the exception of land owned by yourself and certain public beaches, you need to seek permission from the landowner before metal detecting on private or public land.

Can I Metal Detect on Beaches in the UK?

Can I Metal Detect in Woodland?

Woodland can often be a good place to metal detect. However all woodland in the UK has an owner. If you want to avoid getting into bother with the law, then you must seek permission before metal detecting in woodland.

Can I Metal Detect in Public Parks in the UK?

Can I Metal Detect on Farmland in the UK?