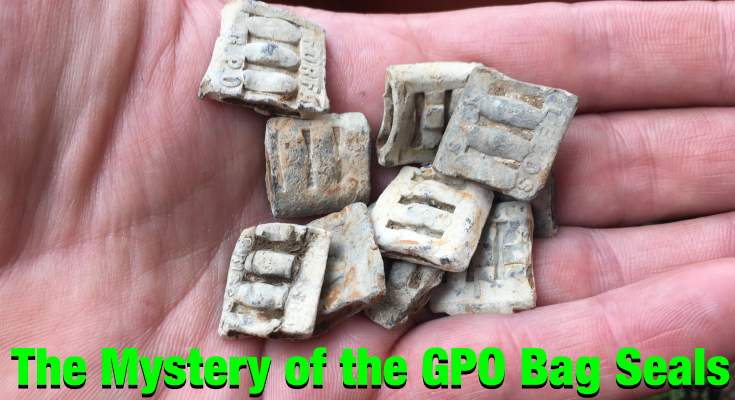 A common find for newbie metal detectorists that often leaves them a little perplexed, is the vintage GPO lead bag seal. These little white squares of lead, measuring around 18mm x 18mm, seem to popup almost everywhere; often in the middle of fields, or even in estuary mud. Typically they will display the name of the destination Post Office branch, however others can be blank. The vertical bars on the seals are crimp marks made with a set of pliers used to firmly adhere the seal to a mail bag.

It’s still a bit of mystery as to why they are commonly found in the middle of pasture fields. It’s highly unlikely that Post Office workers were enjoying doing a bit of mail sorting in the middle of a field on a nice sunny day. One explanation for these common finds is that farmers would use shredded rags as manure, through a process known as ‘shoddy.’ Is it possible that used GPO bags were used to produce ‘shoddy,’ and these lead bag seals inadvertently got mixed up with this unusual source of fertiliser? An alternative personal theory is that perhaps farmers purchased used GPO bags for potato harvesting.

More info on the shoddy process can be found at the following websites:

Most GPO bag seals found in the soil display a distinctive white patina, characteristic of lead with a good bit of age to it. A bit of research suggests that the GPO phased out wax seals for mail bags in favour of lead ones around 1911.

The British Postal Museum and Archive states that:

‘In 1911 the post office replaced wax seals used in smaller post office regions with lead ones for sealing letter and parcel sacks (lead seals were used in the the larger post offices probably since Charles I opened up his royal mail to the public in 1635, Oliver Cromwell established the General Post Office in 1657). In 1916 they made the seals thinner reducing the amount of lead by 19% thus saving £1,770 per annum. The Post Office Controller of Stores supplied the lead to the seal manufacturers directly. These manufacturers at the time were, Dunham White & Co Ltd., J.N.Lyons Ltd., The Lead Seal Manufacturing Co. and Walkens, Parker & Co. Ltd.’

If you have a different theory on as to why vintage GPO bag seals are now scattered all over the fields of the British Isles, please let us know by leaving a comment below!